This is a great product to get you started! 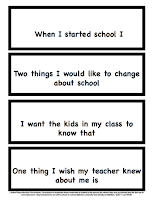 Sentence starters provide a low-stress way for young writers to practice writing complete sentences. Our sentence starters are open-ended requiring your students to use higher order thinking skills while practicing their writing.  Provide your students the opportunities to write creatively with 50 Back to School Sentence Starters.


Each sentence starter is printed on an individual card and on lined paper.

In addition, our activities and ideas provide fun and interest so your students learn through hands-on experiences. No more searching for writing prompts or sentence starters. This unit is ready to go to work for you! 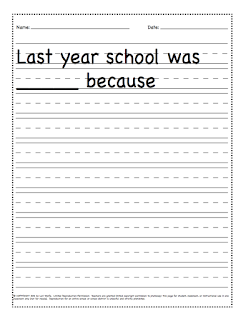 Click here to purchase at our Fun To Teach store at TPT!

It is time again for Tuesday's Tongue Twisters!  Pronunciation can be a 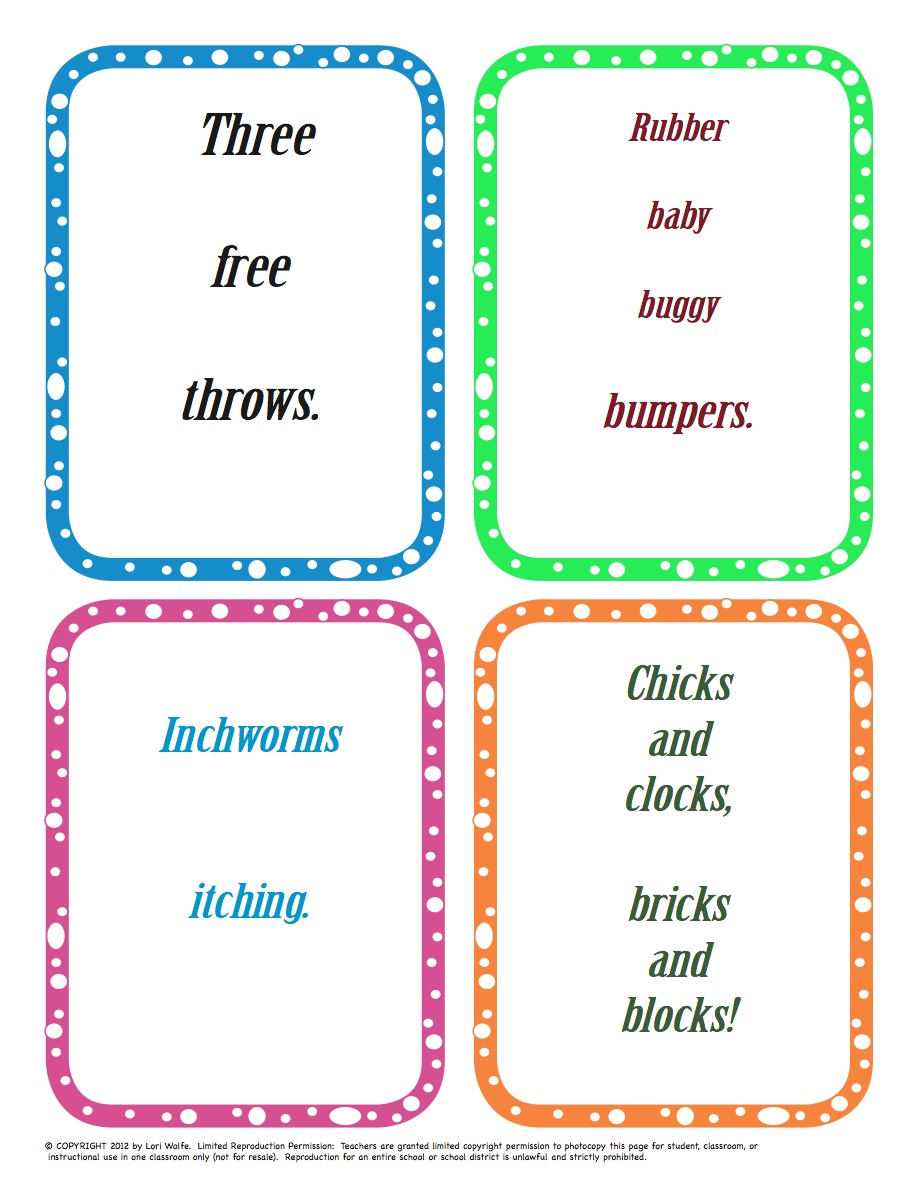 Tongue twisters are fun and engaging for young English learners.  They are also culturally significant and native speakers of English are always willing to join in the fun of this challenging practice. 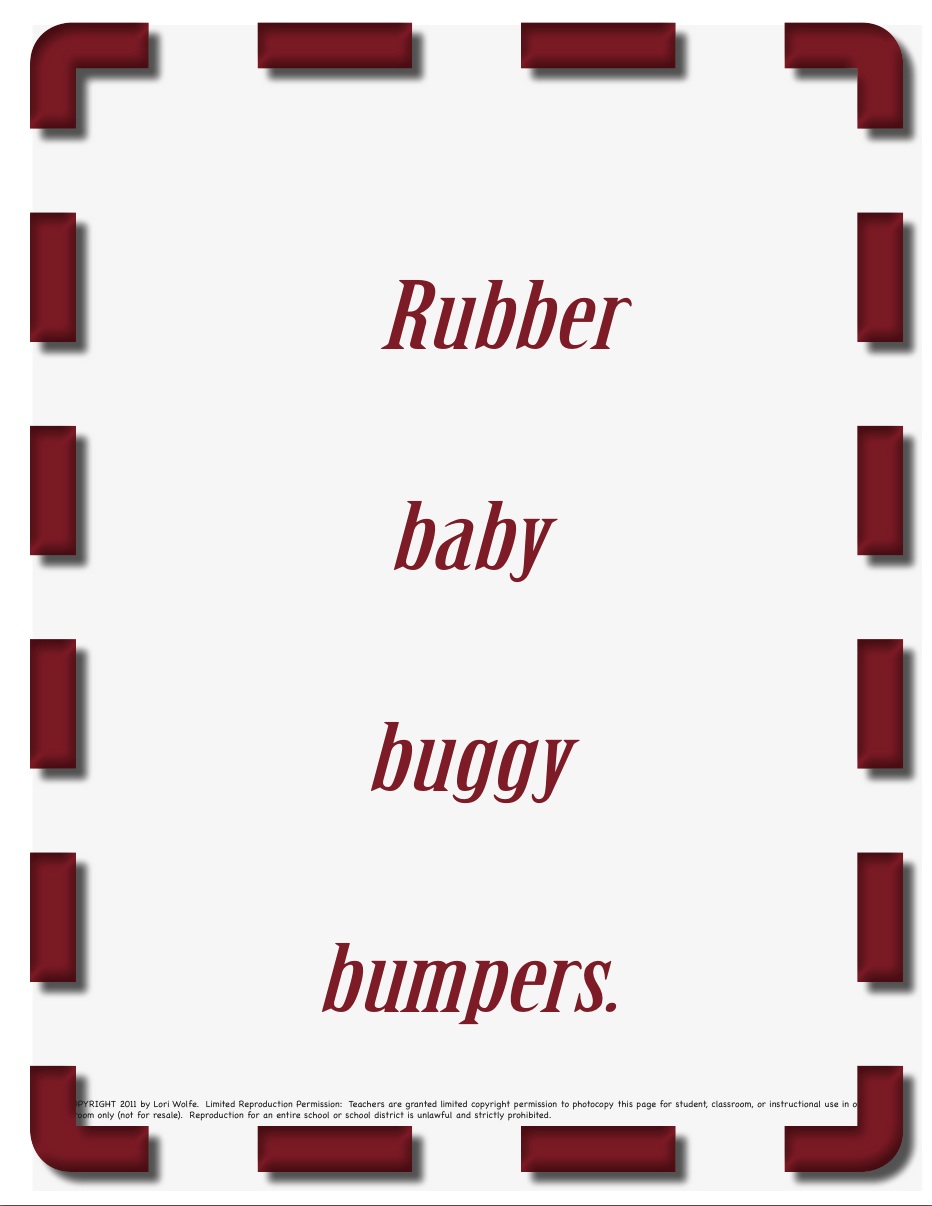 If you want the full version of our Tongue Twisters product, Click Here! 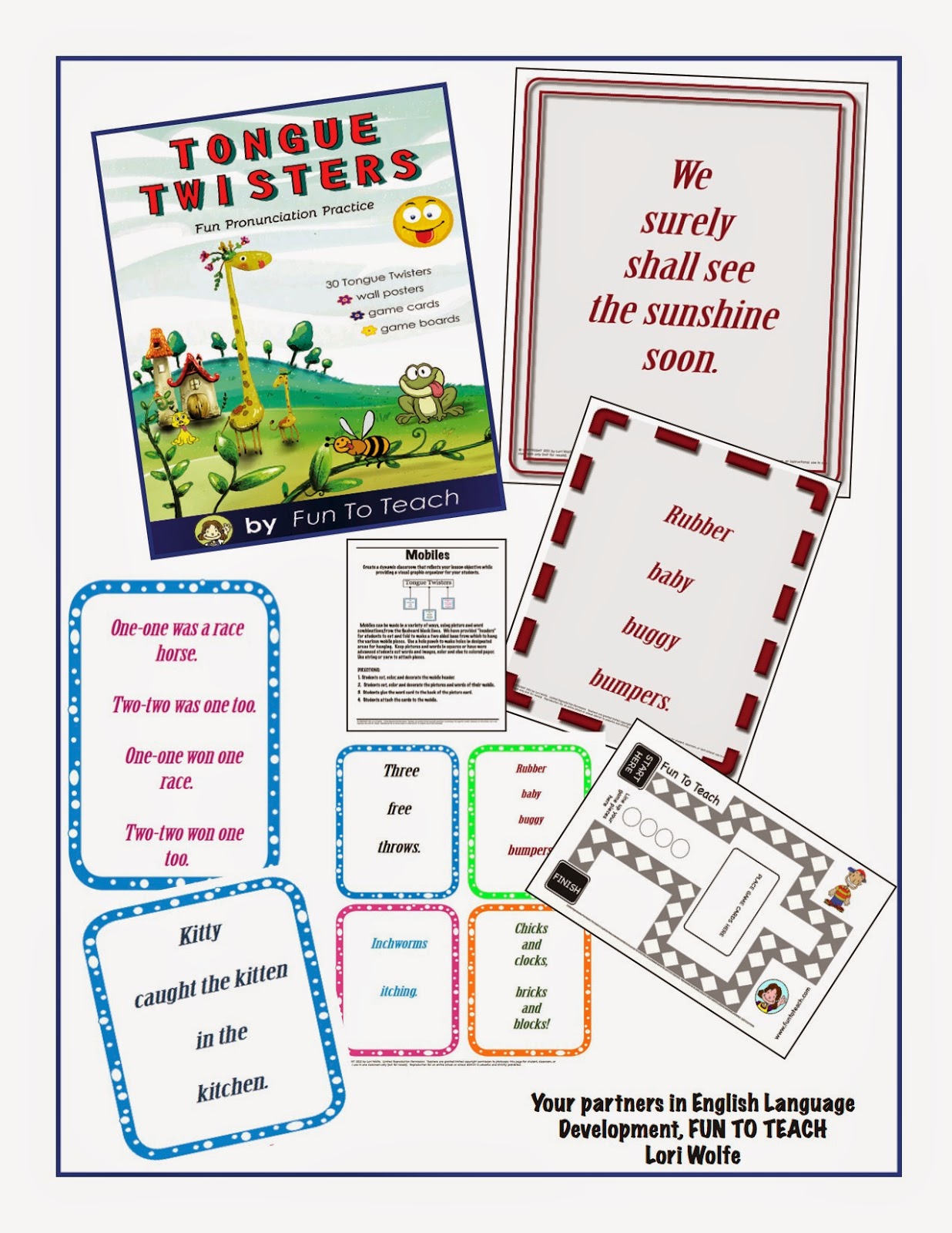 What are some of your hardest tongue twisters?

Today click here and get this great freebie that students love! 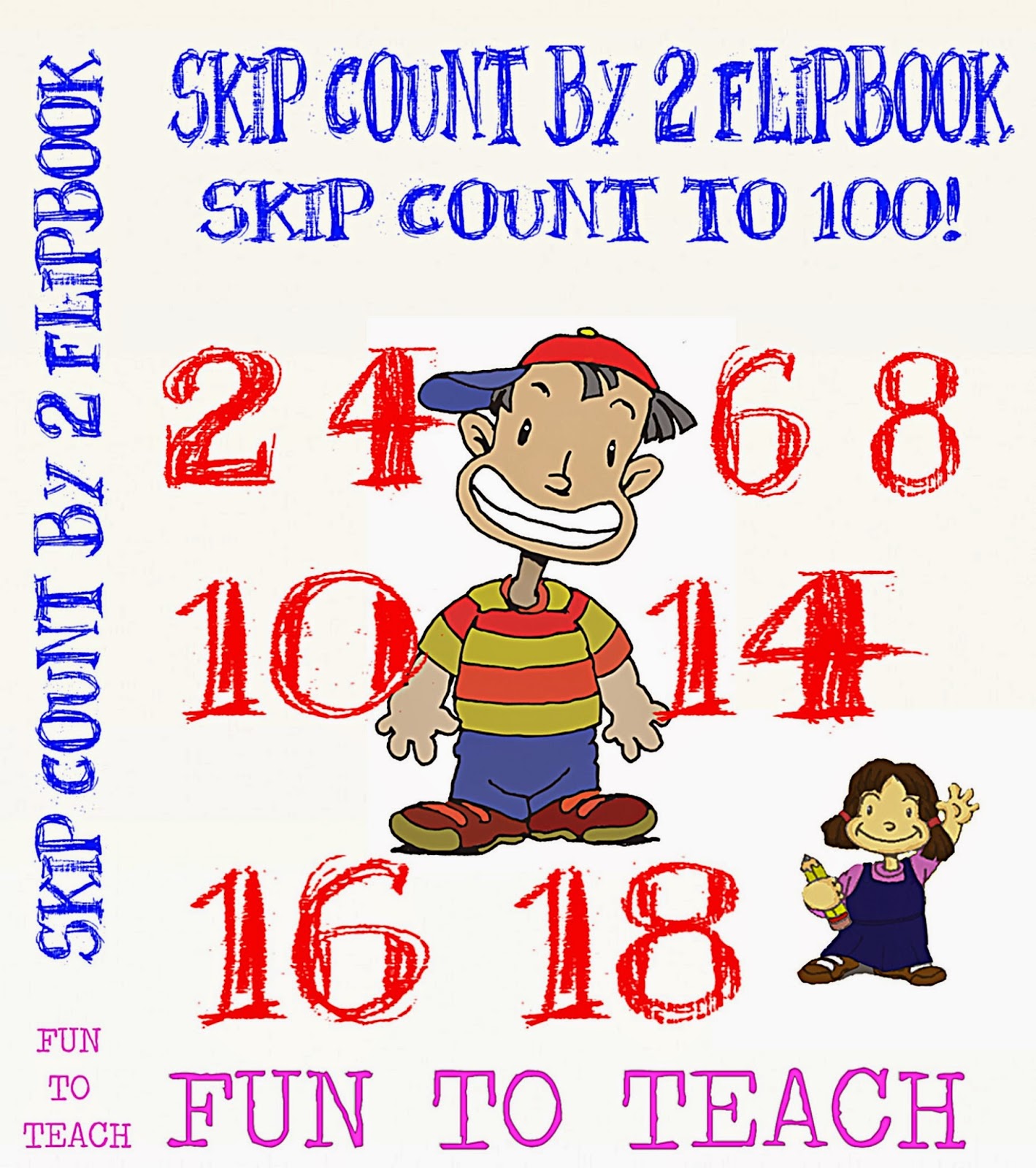 This 18-page Skip Count By 2 Flipbook has interactive flipbooks for students to create and practice counting by 2s. These are engaging books to make as a center activity, or as an extension to your math lesson.

Get your students counting by 2s with this great Skip Count By 2 Flipbook. Students simply color, cut and assemble. Watch your young learners take off counting.

Skip Count By 2 Flipbook can be used during guided math as openers, small group time and math work stations

How to use this book:
Assembly:
• Print on cardstock.
• Cut at the dotted line to separate the base of the flipbook from the picture pages.
• Cut around each rectangle picture box.
• Arrange the number cards one on top of the other and staple or bind the top of all pages to the flipbook base.

This is an engaging way for students to practice their numbers and share their knowledge with family and friends.

Happy teaching!💕
Click here to get this great freebie! 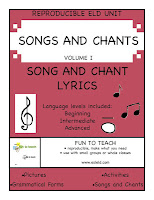 Songs and Chants are a dynamic part of an ELD lesson. Songs/ Chants set the stage for the lesson and help focus the learner on the vocabulary and grammatical structure you are teaching.


GROUPING: Whole class
OBJECTIVE: To introduce a song/chant
WHAT YOU NEED:
• Student copies of the song/chant
• The song/chant written on chart paper

• Sing or chant the song the first time to your students

• Focus in on pronunciation

• Anchor your student’s attention by teaching your students to “look at my mouth.” Help them make the correct mouth and facial movements as you help them pronounce words correctly

VARIATION: Gesture as you sing Sing one part more than once

Check out our great ESL & ELD Songs and Chants Volume ISING IT LOUD! SING IT CLEAR!

This 51-page collection of ELD and ESL songs and black lines are perfect for every classroom with second language learners. Open every lesson with a song or chant from this rich collection of ELD based lyrics and watch your students' fluency grow. Volume I includes 22 songs/ chants, lesson ideas and activities that will raise the oral academic language of your students to new heights. The songs and chants are sung to familiar popular songs or the lyrics are used in call backs or chant style tunes. These lyrics provide a compelling way to begin your ELD lesson while targeting complex English Structures. You and your students will enjoy these engaging and memorable lyrics.

Songs and Chants for:

Gameboards https://www.teacherspayteachers.com/Product/No-Prep-Gameboard-Pack-3314095 Easy! Fun! Flexible! Don’t forget to teach the basics! Many students come to school without knowing how to play boardgames. Students are enamored with the many game pieces, bright colors, special spaces, and fun of boardgames! To Guarantee a learning environment in your classroom and to get the most out of game playing teach the behavior and expectations you require. Before you offer the exciting practice of boardgames to your students remember to teach routines and procedures for the basics. Here are some suggestions: Introduce the game board. Explain what students see on the board. This includes any graphics or writing on the board. Identify the start and end spaces on the game board. Show where the gamepeices line up and where to put the gamepiece on each space. Introduce the game pieces. These include items such as a spinner, a die (or dice), and game pieces. You may have to explain the function of what each game piece is by describing its function. A fun classroom rule when passing out game pieces is to chant, “You get what you get and you don’t throw a fit!” J Practice moving the game pieces around the game board in the correct direction. Practice rolling the dice. In my class we have a rule that if the dice goes off the table, the player loses his/her turn. Explain to students that game play goes in a clockwise direction. https://www.teacherspayteachers.com/Product/No-Prep-Gameboard-Pack-3314095 Encourage students to talk about what it means to play fair. By sharing specific examples such as taking turns and waiting patiently while another player makes his or her move will set the tone in your classroom. Use students’ responses to form the basic ground rules around playing gameboards. Talk to your students about winning and losing. Give them the phrases to use at the end of the game…”congratulations on your win, but watch out next time, I am on your heels” or “It doesn’t matter if you win or lose as long as you have fun!” Present the vocabulary of gameboards. Make a word wall and include words like die, dice, spaces, spinners, board, clockwise, etc. Read the game directions. Have the child repeat the directions back to you to make sure he/she understands how to play. Remind students that game play is a privilege. https://www.teacherspayteachers.com/Product/No-Prep-Gameboard-Pack-3314095 Happy Teaching! Lori
By Fun To Teach at May 24, 2018 No comments:

Do you wonder about the importance of teaching cognates?
Click on over to my Teachers Pay Teachers store and download this article!

Read on and learn a little more about this important teaching concept.
What are cognates?

Vocabulary/vocabulario, animal/animal, actor/actor,  color/color are just a few of the thousand of English and Spanish cognates.
Cognates are an important part of learning English.  Cognates are words in two languages that have the same or similar meaning, spelling, and pronunciation.  Spanish and English cognates include:  doctor/doctor, family/familia, construction, constucción, and electricity/electricidad.  Some languages like Spanish have thousands of cognates with English and other languages like Chinese and Arabic have very few.

Cognates, words in two languages that have the same or similar meanings and spelling increases English language learners vocabularies.

Why teach cognates?
These similarities in meaning and often in spelling give second language learners the ability to figure out new words and learn vocabulary in English more quickly.  These cognates give students an instant foundation of vocabulary.
When students can identify cognates from their first language it increases student English knowledge of vocabulary by thousands of words they already know.

English learners need to simply learn the spelling and pronunciation rules that go with the cognate and they have a strong foundation of English vocabulary.

What does the research say?
According to Nagy and Nagy, et al (1988; 1993) many Spanish second language learners need help recognizing and using cognates.  Direct instruction by the teacher helps students use cognates to understand new or unknown words in English.

What are false cognates?
False cognates are words that are spelled or pronounced similarly in two languages, but do not have the same meaning.  Idioma/Idiom in Spanish and English are examples of false cognates.  Idioma in Spanish means language, while idiom in English means a phrase that does not mean what the words say (raining cats and dogs).
Another important reason to teach English language learners about cognates is to alert them to the false cognates.

What can parents do?
Talk with your children.
When you see a cognates, words in two languages that have the same or similar meaning, spelling, and pronunciation, point them out to your child and talk about the meaning in your first language.  Remember, Spanish and English cognates include:  doctor/doctor, family/familia, construction, constuccion, and electricity/electricidad.  Cognates are everywhere!

Here is a list of everyday cognates you can use to help teach your child the recognize and use  cognates to build English Vocabulary!  Have Fun! 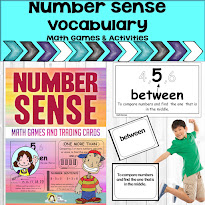 Check out these resources. They are free!

School and Classroom Rules in 3 Languages

This policy is valid from 08 November 2011 This blog is a personal blog written and edited by me. For questions about this blog, please contact esleldblog@gmail.com. This blog accepts forms of cash advertising, sponsorship, paid insertions or other forms of compensation. The compensation received will never influence the content, topics or posts made in this blog. All advertising is in the form of advertisements generated by a third party ad network. Those advertisements will be identified as paid advertisements. The owner(s) of this blog is not compensated to provide opinion on products, services, websites and various other topics. The views and opinions expressed on this blog are purely the blog owners. If we claim or appear to be experts on a certain topic or product or service area, we will only endorse products or services that we believe, based on our expertise, are worthy of such endorsement. Any product claim, statistic, quote or other representation about a product or service should be verified with the manufacturer or provider. This blog does not contain any content which might present a conflict of interest. To get your own policy, go to http://www.disclosurepolicy.org 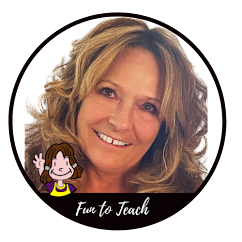 Hi and welcome to Fun To Teach! I’m Lori and I am glad your here. I love creating and sharing resources, teaching tips and tricks and connecting with teachers like you! Thanks for visiting!

The ESL ELL Teacher's Survival Guide
Fun To Teach may be compensated for linking to other sites or for sales of products we link to.

This resource provides a practical guide to collaboration and co-teaching between general education teachers and ESL specialists to better serve the needs of ELLs. Offering classroom vignettes, step-by-step guidelines, ready-to-use resources, and in-depth case studies, the authors help educators: Understand the benefits and challenges of collaborative service delivery Teach content while helping students meet English language development goals Choose from a range of collaborative strategies and configurations, from informal planning and collaboration to a co-teaching partnership Use templates, planning guides, and other practical tools to put collaboration into practice 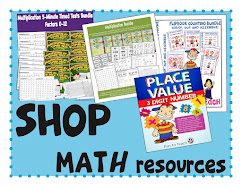 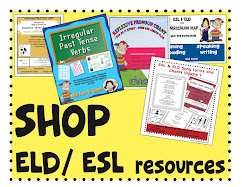